Hands up anyone who is neither nervous nor superstitious about their wedding. Thought not.

More than any of life’s other milestones weddings are drenched in superstition.

Let’s work our way through the day. Or rather, let’s start before the big day with not wearing the full bridal outfit and certainly not being seen in the dress by the future husband. And don’t buy a ring on a Friday (perhaps associated with that unluckiest day and not very good film, Friday the 13th). No practising writing out your married name either – if you are changing it – as that spells doom (along with his surname).

Something old, something new, something borrowed something blue ring any bells? There are many explanations for the elements of that jingle the most common being blue denotes a blue ribbon symbolising fidelity, old and new the life past and that to come, and borrowed the link with the bride’s family as she is to be loaned to a new one. And for completists there is a rarely quoted extra bit to the rhyme: “And a silver sixpence in her shoe,” that signifies future wealth.

Right, you’re dressed and ready to go – but only through the front door, and right foot first, and just before you exit sneak a last peek in the looking glass (then avoid car mirrors etc until after you are wed). If you live on a pig farm shut your eyes until you are beyond the porkers – it’s bad luck to see a piggy wig on the journey to church, unless you are Lord Emsworth. A bit more understandable is that seeing a funeral procession on your way is a bad omen. 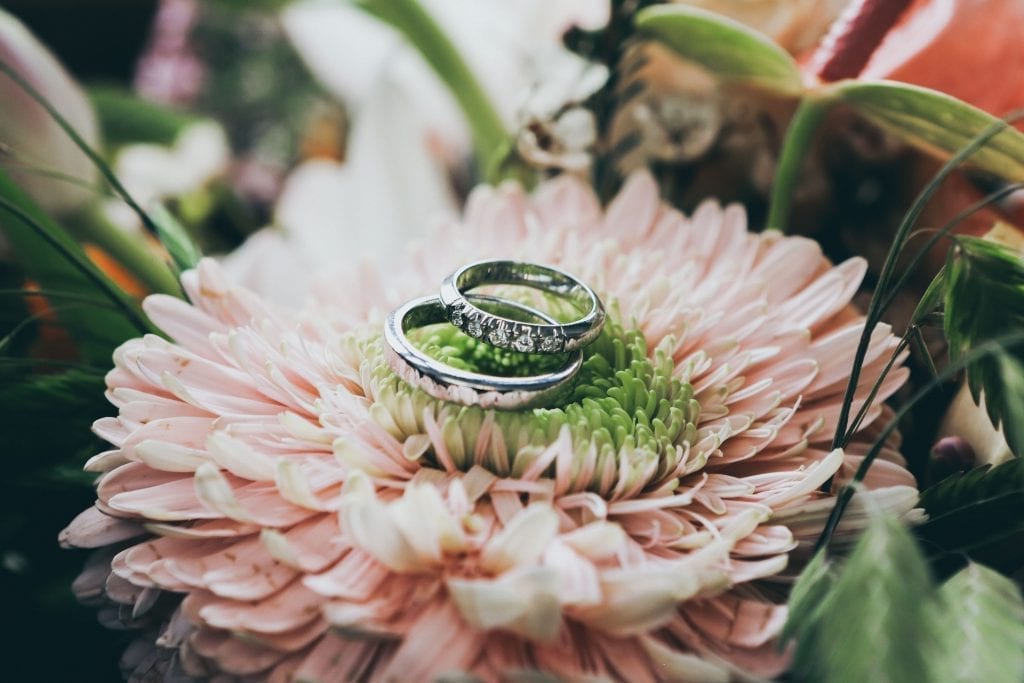 For goodness’ sake don’t drop the rings during the ceremony – it’s very bad luck. And time the thing so the hands of the clock are on the way up not down. So morning or evening, and between half-past and on the hour. And we’re back with the flowers – his buttonhole has to be a flower in her bouquet. It’s nothing to do with clashing, but is supposed to be like some Arthurian knight wearing his lady’s favour. Him wearing her garter doesn’t apparently count these days though what you do on honeymoon is your own business.

Now we come to the throwing of the bride’s bouquet, said to hasten the marriage of the girl or woman who catches it. A little tip here, don’t get too clever – an Italian bride cooked up a little stunt where a micro-lite pilot swooped overhead as she lobbed her flowers high into the air, the idea being he would catch the thing to open it and strew flowers over all the lined-up single females. His engine sucked the flowers in, cut out, and he crashed. Not good luck.

Of course before you bung the bouquet you have to choose the flowers: minefield. Without going all medieval on your arse there is a whole language of flowers: forget daisies which mean forsaken love and columbine flattery, and don’t even think about advertising shame with peonies. Better go for violets which mean faithfulness, good old fashioned roses which signify love, and (if you’re rare or dare) orange blossom for chastity.

Once back outside it’s good luck to see a sweep (cheat a bit and hire one if you feel a bit of extra help wouldn’t go amiss).

Your car from the ceremony to the reception should have a pair of shoes tied to the back, supposedly an adaptation of a Tudor custom where they threw shoes at the couple, though quite how that means good luck is beyond me unless they are Jimmy Choo for her and Church’s brogues for him.

Some brides forget this, but there is a groom to consider. Once on his way to church he must on no account turn back – if anything is forgotten the best man has to go and fetch it, one of his duties that doesn’t involve beer, strippers, and poorly thought through jokes.

At the reception make sure everyone present, even your thinnest friend, nibbles a bit of the cake for good luck (and not a superstition, but no nuts in the mix in case you kill an allergic guest, always a downer). But save some of it to eat on your first anniversary – if it lasts so will your marriage it is said (to help things along and reduce the dangers of food poisoning, putting it in the freezer could be a good idea then).

Not strictly a wedding tradition, but if anyone gives you a pressie with a blade, remember to give them a coin of any value, or your friendship will be broken.

One to boost retail business now: first one in the couple to make a purchase after the ceremony will be the dominant one. I wasn’t allowed money by my wife even before we married so that was never in question. And on the wedding night the first to sleep will be the first (eventually) to die, so maybe find something to do that doesn’t involve sleeping.

Just about the last of the potential jinxes comes when you walk over the threshold of the marital home – if the bride trips it’s – you guessed it – bad luck. Which is why the superstitious will have their hubby carry them over the doorstep (just the first time by the way).

Not a superstition, but worth considering, that along with all those ways of courting good luck a good dose of love, plenty of consideration, and saying sorry even when it’s not your fault help a marriage survive.