Trinity House, home to the General Lighthouse Authority, enjoys delightful views across Trinity House Gardens to the historic Tower of London and the River Thames and is one of London’s most distinguished private event venues. Easily accessed by car or the underground, the elegance and airy spaciousness of the House possesses the ambience of a grand private residence and is an impressive setting for memorable civil weddings and celebrations.

Behind the building’s imposing neo-classical façade, designed by Samuel Wyatt in 1794, are five graceful banqueting and conference rooms – The Library, Court Room, Pepys Room, Luncheon Room and Reading Room, all catering for formal banqueting and weddings ranging in capacity from 10 to 130 seated places. The House’s particularly beautiful Reception Hall, with its sweeping, twin-curved staircase, and Quarterdeck first floor corridor houses remarkable maritime artefacts – including the bell from the Royal Yacht Brittania – that bear testament to the prominent role played by Trinity House in the nation’s maritime history.

The oval-shaped Library is the venue’s most spacious room seating up to 130 and characterised by a minstrel’s gallery and beautiful 16th and 17th stained glass windows. The room houses a fascinating collection of antique silverware and its elegant proportions and dramatic view of the Tower of London make it a uniquely English setting for important celebrations. The adjacent Reading Room is an option for a pre-reception private lunch or dinner for up to 10 people, and the ancillary Pepys Room to one end of The Library provides a flexible addition for banquet set-up or use as a separate dance-floor.

Accommodating up to 130 standing and 60 seated, the south-facing Court Room is suffused with natural light from three large windows and offers sweeping views encompassing the Tower of London to the left and the spectacular new Shard glass tower to the far right. The floor is covered with a carpet featuring the arms of Trinity House – the second largest single-weave carpet in the British Isles – while allegorical painted scenery restored by the famous pre-Raphaelite artist, William Homan Hunt dominates the ceiling. Lined with imposing portraits of former Masters of Trinity House, the adjoining Luncheon Room is an ideal for intimate seated events for 20 or receptions for up to 40.

The history of the House, built in 1794, is omnipresent throughout the building with valuable paintings and antiques showcasing the nation’s remarkable nautical heritage. This chronicle began in 1514 when a young Henry VIII granted the charitable guild of mariners a Royal Charter to regulate the water traffic on the River Thames, their powers later extended by Elizabeth the First. The patronage of the Crown continues with the current Master of the Company, HRH The Princess Royal, filling a role held in former centuries by, amongst others, the diarist Samuel Pepys, the Duke of Wellington and William Pitt. Trinity House is remains today the working home of the General Lighthouse Authority (GLA) for England and Wales and is also a major maritime charity, spending approximately £4 million per annum on its charitable activities. 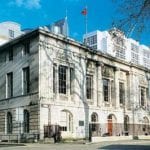 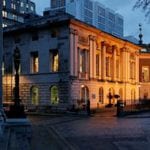 Grand Junction
London
★ ★ ★ ★ ★
Grand Junction is nestled on the grounds of St Mary Magdalene’s Church, Paddington, which has…
VIEW VENUE
Grange Country House
London
Nestled in the heart of Northwood, Middlesex, the Grange is the oldest house of its…
VIEW VENUE
Royal Horticultural Halls
West London
★ ★ ★ ★ ★
A beautiful, versatile space characterised by its gorgeous Edwardian features and stunning glass vaulted ceiling,…
VIEW VENUE
Vuk Banqueting Suite
West London
Any event, whether small or big, consists of numerous minute details which need to be…
VIEW VENUE
Oyster Shed
London
★ ★ ★ ★ ★
The Oyster Shed is a stunning setting for a picturesque London wedding. It is situated…
VIEW VENUE
Lamb Tavern
London
★ ★ ★ ★ ★
The beautiful listed building is perfectly situated within the covered Leadenhall Market, complete with charming…
VIEW VENUE
4th Floor Studios
Whitechapel
4th Floor Studios is a space for hire like no other in East London, upon…
VIEW VENUE
Morden Hall
Surrey
★ ★ ★ ★ ★
If you’ve got your heart set on luxury, romance and an escape from the bustling…
VIEW VENUE