The castle, originally a fourteenth century border tower, has been extended over the centuries and owned by the present family since 1696. Set in 1,700 acres including a nature reserve dominated by a large lake, complete privacy and seclusion is assured.

Edinburgh is a little over one hours drive away and Berwick upon Tweed just twenty minutes away, with its mainline high speed rail link, means that Edinburgh and Newcastle can be quickly reached and London, Kings Cross is only four hours away.

The castle has twelve bedrooms available, including four with antique four-poster beds. Five bedrooms are situated in the castle tower, which dates from the fourteenth century and has wonderful views of the surrounding parkland.

The dining hall is a magnificent, wood-panelled room with a large, open fire that is always lit and flanked by giant, carved dragons. As with all the public rooms in the castle, the dining hall has many old family oil portraits and is full of history, which Alexander Hay and his wife Aline are delighted to share with guests.

Dinner is based on freshly prepared home-cooked local Scottish produce, much use is made of Tweed salmon, local lamb and beef and venison from the castle estate. The dining hall is set with silver and candle-lit and wines from the castle cellar are included with dinner. 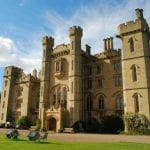 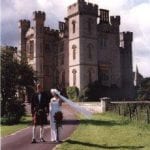 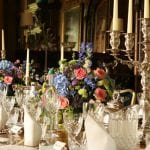 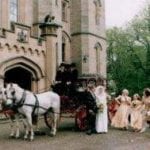 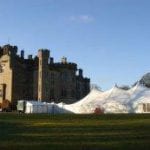 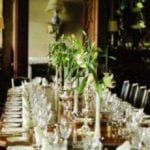 Thank you, we have had a lovely week!

We wanted to say a big thank you on behalf of all our family & friends for making our wedding at Duns Castle so memorable. We just can’t say enough…