The château of La Barben, situated between Salon de Provence and Aix-en-Provence, is one of the most beautiful castles in the Provence-Alpes-Côte d’Azur region. The famous painter, Marius Granet, who was born in Aix-en-Provence, stayed there numerous times and wrote “La Barben is the most ancient and the most picturesque castle in Provence”.

The location of this castle, which is situated in a grandiose setting overhanging an oasis of greenery that grows thanks to the water from the rivers Vallon de Maurel and la Touloubre, would be – according to some writers –, the old Pisavis not far from which the “Aurelian way” could be found. The château, “castrum” of “Barbentum” in latin, was referred to in 1064 for the first time, in a property register that could be read at the Abbaye de Saint Victor in Marseilles who used to be the owner of the lands around La Barben.

Situated on huge rocks that make it impregnable, the fortified castle was built for the defence of the area. Its towers, turrets and its hanging terraces are in perfect harmony with nature, giving this site its mysterious beauty. As soon as you go through the first postern, you discover all the architectural elements that are typical of medieval fortresses : watchtowers with pulleys from the former drawbridge, crenelations and machicolation, arrow slits, the coat of arms and the motto of the lords of the place.

After going up the monumental staircase, you will arrive at the grand terrace from where you will enjoy a splendid view that stretches beyond Salon de Provence and the Étang de Berre. From this terrace you can also reach the gothic chapel. To the south, between the medieval towers, a lovely little castle emerges with its wrought iron windows and balconies that date back to the classical era, and its magnificent Henry IV double staircase.

The château was completely transformed due to an important rebellion against the “Édit des Élus” (Edict of the elected concillors”) issued by Richelieu in 1630. During the rebellion, a gang known as “Cascaveous” who was advancing on La Barben set fire to the forest and a part of the fortress. King Louis XIII condemned the Aix communities which had participated in this riot to give compensation to the Lord of La Barben. Gaspard de Forbin, got 1500000 livres to restore his castle. The medieval fortress firmly built high on the rocks, took advantage of the Age of the Enlightenment and became a castle where austerity and classicism combined to give this building a unique picturesque charm.

In 1909, the region was rocked by a major earthquake, destroying the western medieval tower known as the “Palamède tower”. Two years later, the owners had it rebuilt on the same rock. 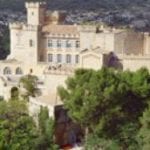