Ladies & Gentlemen we proudly present the coolest band in the land: THE DRAT PACK, performing many of the greatest swing numbers of all time. If you want that classic swing thing made famous by Frank Sinatra, Dean Martin & Sammy Davis Jnr., as well as several of the modern swing greats such as Robbie Williams, Michael Buble & Jamie Cullum, then THE DRAT PACK is the one for you. Swinging their way through classic tunes such as Fly Me To The Moon, I Get A Kick Out Of You, Mr Bojangles, Mack The Knife and New York, New York, this is the band to make your feet tap and your hips sway. THE DRAT PACK are also a very versatile band who are equally at home playing many other styles including motown, soul, funk and more up to date pop, ensuring that your evening goes with a bang as well as a swing. 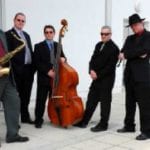 Not sure this is the supplier for you? No problem. Based on your search results, here are some other options that we think might tickle your fancy...